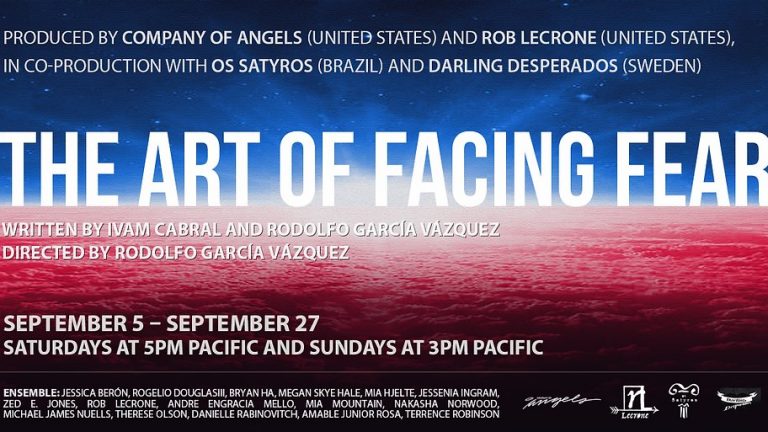 Perhaps one of the most important life lessons I have ever personally learned was that the human mind is basically held back from moving forward in the decision-making process by the universal human emotions of fear and confusion. Just think about the last time you had to make a choice, call it a decision if you prefer, and your confusion about what to do and fear about doing the wrong thing kept you from making any type of change in your life. And once I learned that lesson, when I sense fear and confusion are keeping me from walking through the door to experiencing life as I really want it to be, I simply acknowledge their presence and take that first step past them. Not the right choice to have made? Then simply choose something else and stop worrying about it. We all can learn from our mistakes.

Such is the theme of THE ART OF FACING FEAR,a one-hour virtual play offering a wildly surreal and cathartic experience, set in a possible not-too-distant dystopian future with the quarantine at 5,555 days. We are invited in to meet a diverse ensemble of individuals dealing with the stress and fear of being confined to home without the human need for physical contact possible. As they share effects of the Coronavirus on their everyday lives, a sense of the encroaching authoritarianism and intolerance which threatens our lives, liberty, and identity as free people of the world is brought into focus as they wonder when or if things will ever return to normal. And just what is normal anyway? And to whom?

As the actors morph from character to character, they share the effects of the Coronavirus on their everyday lives, as well as their sense of the encroaching authoritarianism and intolerance which threatens our lives, liberty, and identity as free people of the world. But in the midst of all their great sense of loss of real physical contact between people and the incredible ways in which the situation is being faced by these now “online chat” friends from around the world, by the end of the play the good news seems to reflect the ancient Greek myth about Pandora that no matter what, there is always hope we will learn to overcome our fear and confusion and take the next positive steps to a new reality.

Opening in São Paulo, Brazil to audiences of as many as 600 viewing devices per night, and followed by an African/European run featuring a cast from three different continents, THE ART OF FACING FEAR has now arrived in the United States and runs Saturdays at 5pm Pacific and Sundays at 3pm Pacific through Sunday, September 27th. This U.S. production features a cast of actors performing from across the U.S., including California, New York, Oregon, Nevada, Georgia, and Alaska, most of whom have never met in person but have managed to create strong connections with each other to the point of connecting down to our basic and universal humanity which unites us all. And that is apparent in every scene of the play with each version of the script tailored to reflect the countries in which it is performed, pushing the boundaries of digital theater.

Written by Ivam Cabral and Rodolfo García Vázquez, founders of São Paulo’s experimental theatre group, Os Satyros, and directed by Vázquez who has helmed all three productions of the piece to date, each has been developed with the actors bringing characters to life as they share not only his words but their own personal observations. “We don’t know each other, but somehow our humanity in this pandemic makes us all very close to each other. There is a feeling of the human community and that we all belong to the same race and we are experiencing versions of the same thing right now,” director Vázquez said during the first rehearsal with the U.S. team, speaking to the reactions from audience members in the Brazilian and African/European post-performance talk-backs.

Produced by Company of Angels and Rob Lecrone, in co-production with Os Satyros (Brazil) and Darling Desperados (Sweden), the production is blessed with a heartfelt and soul-searching ensemble of performers, including Jessica Berón, Rogelio Douglas III, Bryan Ha, Megan Skye Hale, Mia Hjelte, Jessenia Ingram, Zed E. Jones, Rob Lecrone, Andre Engracia Mello, Mia Mountain, Nakasha Norwood, Michael James Nuells, Therese Olson, Danielle Rabinovitch, Amable Junior Rosa, and Terrence Robinson. And if I had the space and time, I would go into each of their extraordinary contributions to the overwhelming success of this production. But I have selected just a few to share so as not to spoil the overall effect of the entire production.

There were several scenes, all brilliantly lit by director Vázquez, which challenge you to watch and accept the reality with which people are living during our current isolation. Perhaps the most shocking to me was watching Rogelio Douglas III wrapping his entire head with plastic wrap to the point of gasping “I can’t breathe,” the last words spoken by George Floyd. So authentic and emotionally deep-felt, I found myself really worried Rogelio would suffocate before he came to his senses and tore a hole in the wrapping to allow him to catch his breath.

I cannot quote the words he said, nor any by the diverse cast of “Black and Human” actors in the show, since I was so pulled into watching and listening to them that I could not look away to write down any words, but I can tell you Rogelio’s scene was one of the most provocative and theatrically confrontational moments I have ever witnessed, both in a theater as well as on-screen, listening to a Black man talk about what it means to live in the world from his perspective.

Another striking scene involved the actors moving in and out of darkness as they delivered their lines, emphasizing how we are all the same while being so disconnected from each other. We all want to grab our moment in the spotlight, but will others really listen to what you have to say? In this production, you certainly will, from cast members explaining the importance of the Black Lives Matter movement to a bandana-wearing, gun-waving Hell’s Angel type, to partygoers celebrating alone during Brazil’s Carnival to the actors themselves, as audience members are pulled into the reality of their lives and are made able to hear their words from within the characters’ souls.

THE ART OF FACING FEAR challenges its audiences before the play even begins into revealing via the chat mode about what they are afraid of right now, then incorporate many into the play itself as the cast talks about their own fears. With such honestly shared fears becoming part of the story, the audience is drawn into the characters’ worlds of isolation as if it is us being presented in the play. I am sure we all can comprehend that in a time when all media has died and there is only electricity to power the internet so people can all video chat with each other as the only means of communication, the need for human physical connection is driving many of them to the point of creating mind-altering realities as we face an uncertain future where our isolation from each other may continue much longer than anyone has anticipated. Fearful times we live in, for sure.

Lead Producer Rob Lecrone shares, “Several times in my life, I’ve heard the phrase, ‘we live in interesting times.’ While it’s always been true, the phrase falls short of capturing our current situation. In LA, the reality of the pandemic hit home just before the second weekend of March. Suddenly shows all over the city and country were closing down, one of which was a two-week run of the world premiere of Nicholas Walker Herbert’s ‘Bloodless,’ a dystopian play set in a broken future America. I found it ironic that a dystopian American play was ended because of circumstances that looked like they could lead to a dystopian America. It had me considering where the line was. When is it too late to turn back?
Then in the midst of this came the unnecessary deaths of more Black Americans at the hands of systemic racism. Brazil and the United States are similar in that they were both founded on slavery, and the mental gymnastics, justifications, and policies needed for that to happen have permeated our societies ever since. Protestors in America are not asking to change the past, but to change the present and the future. This piece is a reflection of that on a grander scale, as we gathered people from across the nation while having the opportunity to meet and work with artists around the world. Our amazing group of collaborators and this project have fed my soul. I hope it feeds yours.”
It certainly did mine during this brilliant theatrical production which speaks the truth about what is really going on in our world right now, asking us how we fit in while thinking about how we can, or will, move on together when the time is right to do so, hopefully after gaining a better understanding from many human viewpoints and emotions. I hope you will allow yourself to open your mind and hear the truth being spoken in the brilliantly creative New Medium of virtual theater, presented by talented artists on the cusp of artistic greatness.
THE ART OF FACING FEAR tickets are available on a sliding scale up to an hour prior to each performance at http://companyofangels.org/aoff, with the link to join the digital room live performance automatically emailed to you a half hour prior to showtime on Saturdays at 5pm Pacific and Sundays at 3pm Pacific through Sunday, September 27th. Be advised there is strong language, simulated drug use, implied violence, and a scene with strobe light effect. And be sure to stay for the cast Q&A after the show.
Fonte: Broadway World 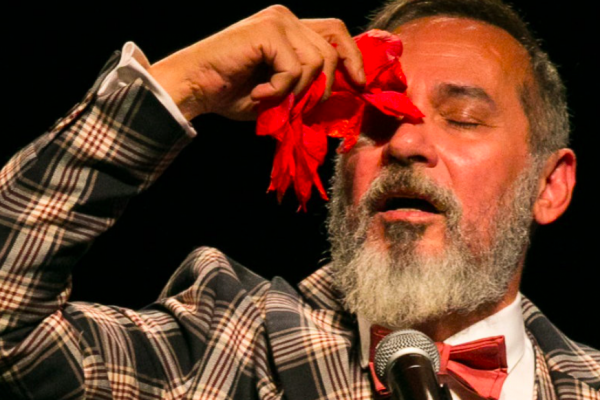