In ‘The Art of Facing Fear’ by Ivam Cabral and Rodolfo Garcia Vazquez, directed by Vazquez, this topic is explored as well as the authoritarianism and intolerance we are threatened with every day. Where there is fear, there is also hope.

In this virtual play, written at the start of the COVID outbreak, a theatre group known for its innovation and experimental use of technology come together online on day 5,555 (15 years, 3 months) of the pandemic to develop a new kind of theatrical production; one that explores how art is created, while discovering how we connect and work with each other and audiences. In doing so, they create an international community of artists that explore the topics we are faced with each day.

This is the third time that this production has been mounted, but the first time in the United States. It first opened in Sao Paolo, Brazil and played to audiences of up to 600 viewing devices per night. Next, there was a European and African production featuring a cast from three different continents. Each version of this play tailors the script to the countries in which it is performed. This version is produced by Company of Angels in Los Angeles and Rob Lecrone, in co-production with Os Satyros (Brazil) and Darling Desperados (Sweden).

Producer Rob Lecrone, while based in Los Angeles, is an Alaskan, and he is one of a few members of the current cast that has Alaskan ties.

“(Vázquez)was looking for someone to be the lead American producer for the U.S. version of the show,” Lecrone said. “He reached out to an old friend, Professor Stephen Rothman at Cal State-LA. Steve, who had been my director on my MFA thesis show, (who) contacted me. Based on my work as a co-producer for that earlier project, he felt I was a good fit to fill this role and help Rodolfo bring the show to the United States. One meeting with Rodolfo later, and I was on board.”

With the current COVID pandemic and the cast performing from six different states, the actors and crew were faced with entirely new challenges in performing. Lecrone welcomed these challenges and explains how this new method of rehearsal and performance went.

“As an actor, this is not film or TV; it is a different type of theatre. The connection with the actors’ eyes is very important to this show, but in television or film, the rule is that the actor doesn’t look into the camera. Some people would say this is not theatre, but I don’t agree. Yes, it is something new entirely, but to me it is also theatre. There are many different kinds of theatre, and this maintains the live aspect and also, for the actor during performance, there is much that feels the same,” Lecrone said. “This also translates to rehearsals. We are not in the same space, but we are in the same space. Rodolfo talks about co-presence, which is when we are together in the same place, and he talks about co-telepresence. We are still together, and though we are in our separate spaces, we share this space together. We are able to rehearse together. We are able to perform together.”

Each actor was responsible for their own sets and lighting during the play, and in between scenes needed to rush to reset costumes, decorations and more. For creating the effects, they were assisted by Adriana Vaz and Rogério Romualdo, the visual design team in Brazil.

The other performers that have Alaskan ties include Danielle Rabinovitch and Amable Junior Rosa, both in Anchorage as well as Megan Skye Hale, who is from Valdez but lives in Portland. All of those actors, plus Jessenia Ingram and Zed E. Jones, have also been involved in the Valdez Last Frontier Theatre Conference.

Rabinovitch echoes statements from others in the cast and crew that while this is different, it may open up new ways for actors and artists to perform and interact with audiences.

“It will be interesting to see how it develops, how we can push the limits of the medium and what the new normal of theatre will be in the future, once theatres open again. I don’t think it will entirely replace in person theatre. but it has the potential to be more accessible and inclusive.”

The show includes visual and audio effects, fully designed sets, costume changes, and live singing, but some of the most stunning moments come from the personal stories and interactions with the cast. Around the halfway point of the show comes a portion called “Black or Blank” where the BIPOC members of the cast play a game that is pulled from their real experiences being a person of color in today’s United States. After the show the audience was invited to stick around on the Zoom meeting for a chance to ask the cast questions and give virtual applause. Then they were invited to break off into smaller rooms for a more personal talk with the cast.

For Rabinovitch, this has been one of the most rewarding parts of the process. “The conversations that are sparked in the audience talk backs have been fantastic,” she said. “It’s been a wonderful experience and I’m grateful and humbled to be working with these dedicated, fierce, talented individuals.”

We don’t know where we will be in in 5,000 days. At times we don’t know what tomorrow will bring. ‘The Art of Facing Fear’ presents one interpretation of the world that might be. This production and the actors that present it do so in a manner that is not just brave, but entirely fearless. It is rare for a piece of art to challenge so many important topics in less time than two-hours.

No matter where you stand on the issues of our day, this is a production that you should experience. You might come away with an understanding or at least an appreciation for a view that is different than yours. As you watch these actors, you’re bound to get a glimpse of yourself, as well.

This show has strong thematic elements including strong language, simulated drug use, implied violence, and a strobe effect.

+++ photo: Producer Rob Lecrone, while based in Los Angeles, is an Alaskan, and he is one of a few members of the current cast that has Alaskan ties. 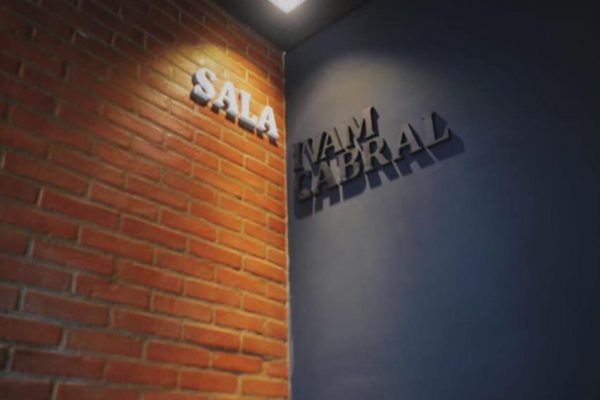