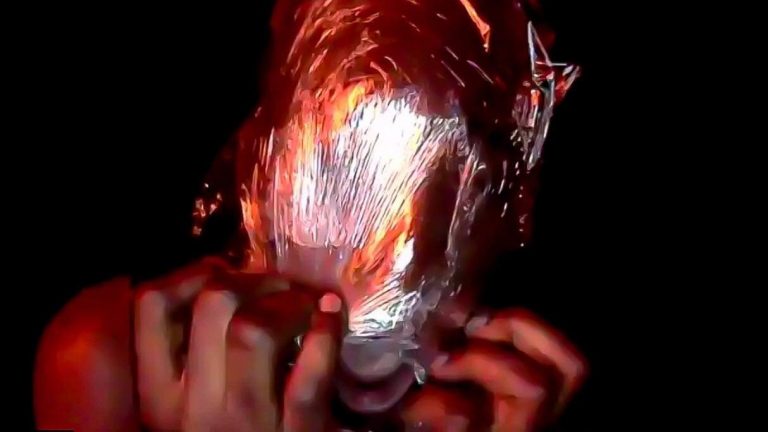 We went through a 7 hour marathon of three casts performing the same play across the globe. Here’s what we learned.

By Ricky and Dana Young-Howze

I don’t really know if this play is a play that you take in, in its entirety or if you let the dramatic fragments hit you directly or cut your soul as they pass by you. I don’t know if you can take in the whole thing without having to unpack it for years. This is why Dana and I decided to sit and watch all three performances of The Art of Facing Fear written by Ivam Cabral and Rodolfo García Vázquez and produced by Os Satyros with three specific ensembles. What we found is that we left after seven hours with three equal parts of: confusion, awe, and a sense of deep meaning.

The disbelief starts with the sheer amount of effort to make this happen. I have no clue how director Rodolfo Garcia Vázquez would start directing a play like this with three casts, ten countries, and more than three languages. I don’t even know how to navigate that quagmire. I have no clue how you start or how you finish. For once I’m really cool with that!

All three have the same story of a fictional future where we have been stuck in quarantine for over five thousand days and what kind of dystopia that would bring. In the beginning the cast talks to you and asks you to list fears and tell stories of loved ones you’ve lost. They eventually incorporate this into the script.

I think this is storytellers’ theatre in expressionist drag. This is a really great thing because we can tell that the writing was hand tailored to include each culture and cast’s particular needs and focus on the story that THEY wanted to tell. It felt like each cast had a very specific THING that they wanted me to get and for the most part I feel like I “got it” each time. Even when I had seen the same scene three times each time it was done a very different thing clicked in my brain. If this wasn’t a truly community script co-created by the culture and honesty of each cast partnered with dramatists Ivam Cabral and Rodolfo García Vázquez, who were willing to listen then it would have truly been dead on arrival. I wanted to honor that spirit with my praise.

I kept on thinking about how this show was tailored specifically for the audience and the cast and it makes me smile, even days later. The idea was to get us inside the play, to have “skin in the game”. The very act of asking us to name our fears, tell stories of our loved ones gets us invested in the show right away. We say that certain digital performances “break the Fifth Wall” of the screen but this move right in the beginning of the play shattered it.

Dana did talk about how having the actors saying our fears back to us felt like they weren’t our words at all but a romanticized version of us. Just the act of hearing them coming out of a different mouth created a weird estrangement between us and our own words. I couldn’t tell if the play intended the actors to be our “avatars” into the world of the play (connected to us by something we identify ie our words) or if they were supposed to become an Everyman.

Each ensemble cast was a signature part of each performance, like a crown jewel. The African and European cast were a very generous and passionate group of people that we could trust. We don’t know any Portuguese at all but the emotion and expression in the Brazilian cast broke that barrier. They were our favorite cast! I did kind of get this voyeuristic feeling watching them. The American version showed me how much urgency and intense energy American actors give each line. Each line was way more serious and felt like it HAD to be told now. Dana remarked on the sense of “group loneliness” they felt watching them. Each actor was literally alone but they were alone together with the rest of the cast and the rest of us.

This was one of the first performances that felt like it had some “art direction” to it. Someone really took the time to make decisions of what we saw on our end. It was like this was the first Zoom play designed for the “end user”. This is a tribute to Adrianna the set, lighting, and costume designer. I would never envy her the feat of Hercules she took on to get this show mounted.

Lastly the music of all three is what took it home for all of us. We had this mix of acapella and instrumental music throughout. They really played around with different textures of music. I love how hearing so much music in foreign (to us) languages just washed over me and then in the American cast it all became way more poignant to me because I could understand the lyrics. I don’t want to blame all of this on just language recognition but it was a very interesting effect when I would be watching a very familiar scene and then music I knew would be playing and then I’m crying. Totally a tribute to the power of music.

One of the things a therapist told me to do when my massive intrusive thoughts and anxieties due to OCD gave me panic attacks was “play it through”. She wanted me to play the horror movie running in my brain through to the end and realize who I was on the other side. To check the anxieties against the truth that I know about myself. I think after seven hours sitting with this play in multiple languages I realized that this play was trying to get us to do the same. It wants us to play the anxieties that we released into the actors’ mouths and realize that the people we are won’t change. Yes this is bad and it’s great to see a play that admits it in a creative way but they also bring us back on the other side.

The Art of Facing Fear is written by Ivam Cabral and Rodolfo García Vázquez, founders of São Paulo’s experimental theatre group, Os Satyros. Vázquez has directed all three productions of the piece to date.To Learn More About This Wonderful Show Click Here.